Differences between Cider and Perry

These are perry pears, which tend to be smaller & harder then dessert pears. Perry tends to be produced sweet or medium sweet although Camra’s 2003 National Bronze Perry was Barkers Dry from Worcestershire. Perry also contains natural levels of non-fermentable sorbitol. Perry trees while bearing fruit in 3/5 years will continue to produce fruit for 200 or 300 years which is much longer than apple trees, this has lead to the phrase “plant perry for your heirs”. 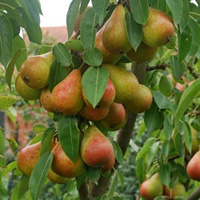 To start off with, choice of fruit is more limited. This means that unless you have access to perry pear varieties you are more than likely to produce indifferent perry. The fruit is also more variable, with some types rock hard and others extremely soft – and it is harder to tell if a pear is ready to press this requires more trial and error than cider.

Secondly, because of the make up of pears, some varieties (e.g. Butt) need to be macerated for a while after milling before pressing. This makes the fruit produce a more stable fermentation and reduces high tannin levels. This does not apply to all pears though – Blakeney Red, for example, does not require any maceration and some varieties will dissolve into a slush that is difficult to press.

However, apart from these differences (and the fact that perry is naturally a sweeter drink if simply left to ferment), perry is as refreshing and satisfying as cider.

Oh, and don’t be confused with the latest ‘pear cider’ fad – perry is the same thing. Whilst not a guarantee, most full juice crafted perry’s are exactly that. Most perry’s that are labelled ‘pear cider’ are in fact subject to similar industrialised processes (chapitalisation etc.) that mainstream cider (or even ‘apple cider’) are made up of – designed to be cheap and quick to produce for mass consumption.