No sugar in REAL cider, avoid the fake stuff

A Study by The Telegraph finds a single pint of cider contains almost as much sugar as the World Health Organisation recommends should be an average person’s daily limit.

Heres the link to the Telegraph article.

Ciders that are in this report are syrup or concentrated sugar made on a industrial scale like Strongbow, Magners or Bulmers. Readers of this blog already know these are not recognised as real ciders, as they contain very little, or no apple juice at all.

According to Andrew Lea, the sugar content of *absolutely dry* and *totally & fully fermented* full-juice cider is as follows:

“The balance of Glucose and Fructose and the exact amounts remaining will depend somewhat on the yeast strain and how glucophilic or fructophilic it is.” 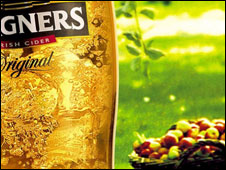 Ciders not recognised as being Real

Below is a list of the most common ciders that we do not recognise as being real:

Most of these ‘ciders’ have nothing to do with real cider except in name and the fact that a minor portion may have see some kind of apple product at some stage in the production process.

We want you to get involved with real cider, so we have listed the ones here to avoid.

Here they are (Source: CAMRA).

Why are they not real cider?

The ingredients listed on a can of Strongbow are:

These cider imposters have had most of the alcohol derived rom fermenting corn starch syrup which is then diluted with water. Malic acid is then added in order to get a bit of taste back into it.

Doesn’t sound very appetising does it?

It doesn’t mean that the drinks aren’t refreshing on a hot summers day, however with real cider you will find the majority are organic, free of artificial colours, acids and antioxidants.

The drinks don’t last as long in the bottle, but because they taste of real apples it means the cider doesn’t normally stay in the bottle long before it is enjoyed!