How to promote your real cider range in your pub

You have decided which ales you want to stock in your pub, but how do you now promote them?

In a competitive market an exciting good quality range of ales can be a key tool in helping you win and keep customers, but unless you tell them what you are selling now, and in the future, why should they come to your pub?

Nick is an IT Professional and a keen cider enthusiast based in Bristol. He has recently started sharing his thoughts on cider through his blog called ‘The Cider Blog’ (theciderblog.wordpress.com).

Here are his responses to our questions for cider drinkers:

Recently I tweeted out for people to share their pubs cider boards, after a recent visit to Bristol to find this amazing selection, in the CAMRA award winning Orchard Inn.

We had a great response, cider boards from Dorset to Huddersfield were shared with us.

The photos below show a mouth watering selection, and proving that landlords who want to champion real ciders, and support cider makers have a fantastic selection to choose from. Proving that you don’t always have to attend a cider festival to enjoy a seasonal selection of craft ciders and perries.

If you want real cider delivered to your door check out The Buy Cider store.

Can your pub can do any better?

Leave your message and photos in the comments box below. 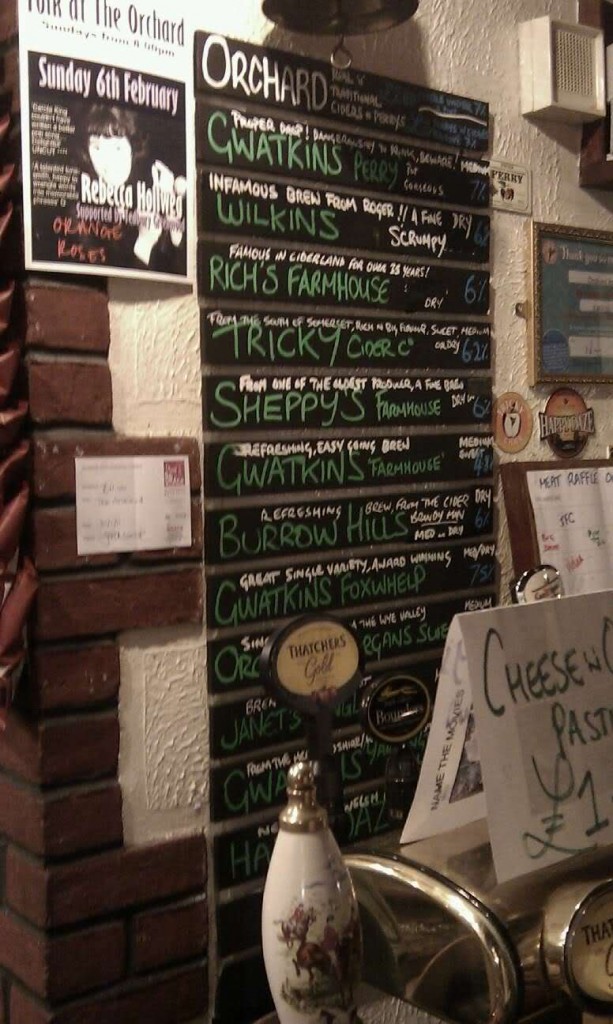 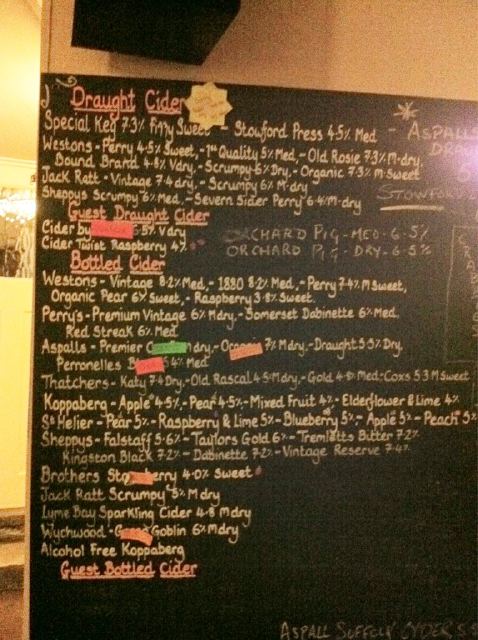 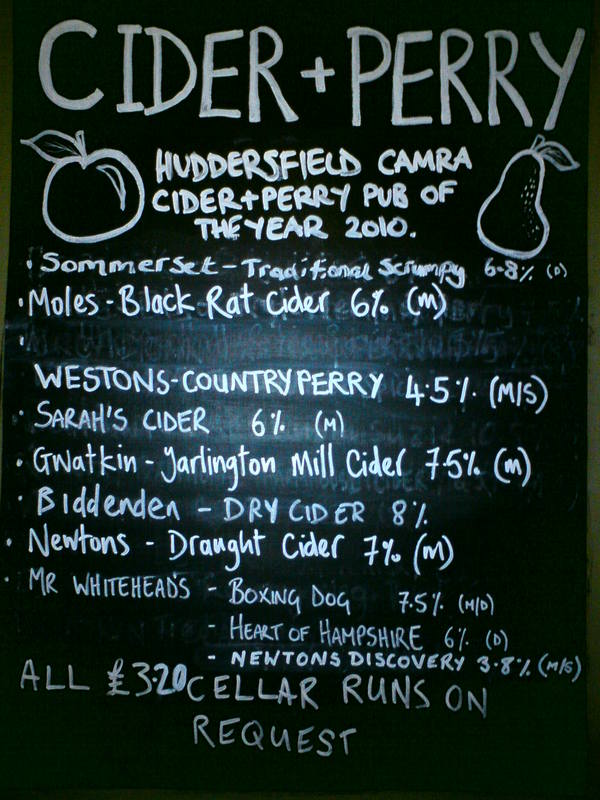 Cider selection at the Rat and Ratchet, Huddersfield

Have you discovered the central London pub that has been awarded National Pub of the year by CAMRA this week?

If not, then we may have given you a very good excuse to go and hunt down this very traditional English boozer, offering a very good selection of traditional ciders from around the country. 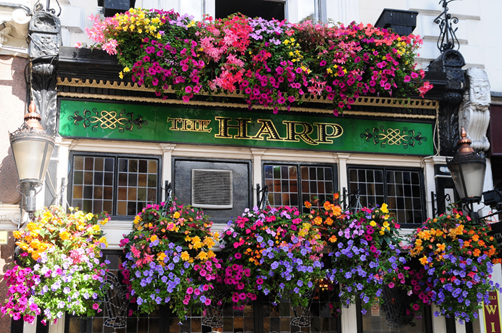 CAMRA’s National Pub of the Year accolade recognises all the criteria that make a great pub, including atmosphere, decor, customer service, value for money, clientele mix, and most importantly, the quality of the cider.

Bridget Walsh, The Harp owner, tweeted me this week to share the selection of ciders and perries they have on:

‘This news came as a complete shock but of course we are delighted to be named CAMRA’s National Pub of the Year. We pride ourselves on the range and quality of our real ale and to be London’s first ever National Pub of the Year is a real honour. I would like to thank my locals, CAMRA members and particularly my brilliant staff, who made this a real team effort.’

Visit the pub to check out their fine selection of ciders:

Agree, disagree with CAMRA’s choice – let us know by leaving your thoughts in teh comments below.

CAMRA Toasts Greater Availability of Real Cider Across Britain (they are not all from the South West!)

CAMRA, the Campaign for Real Ale, as part of their Cider Month celebrations in October, has today raised a toast to more than 550 pubs that have signed up to a scheme that helps their outlet promote they sell ‘Real Cider’ to passing trade.

Andrea Briers, CAMRA’s Cider & Perry Campaigning Chair said, “We are delighted with the success of this simple campaign. In just 12 months, more than 550 pubs have signed up to our Real Cider promotion.”

Achieving accreditation to this scheme is simple. Pubs that serve one or more draught real ciders, according to CAMRA’s definition*, all year round, are asked to visit CAMRA’s website www.camra.org.uk/ciderstickers and list a selection of the Real Ciders they have sold in the past 12 months. These are then checked by CAMRA, accreditation is awarded and windows stickers are issued.

Andrea Briers continued, “There has been a huge demand for Real Cider at CAMRA’s beer festivals in recent years and more pubs are now homing in on this success. With almost 40 pubs closing every week, campaigns like this help pubs differentiate themselves from other pubs. By affiliating to the scheme and displaying to passing trade you sell Real Cider in your pub, you are opening your doors to more new customers who are searching for a drop of the real stuff!”

“They are not all from the South West!” Despite 17% of the pubs that are affiliated to the scheme being located in the South West of England, an area traditionally known for producing and selling cider, there are plenty of pubs offering Real Cider from all of the other regions of the UK.

Number of Pubs per Region that have affiliated to CAMRA’s Real Cider promotion:


Please visit www.camra.org.uk/ciderpubs for a full list of affiliated pubs by region.

Briers said, “To have pubs accredited to the Real Cider scheme from all regions is very pleasing. This goes to show that pubs all across Britain, and not just typical cider heartlands, are now realising what Real Cider can do for the pub’s business. We would like to encourage more pubs to consider signing up to this scheme. Of course, offering Real Cider may not work for everyone but if the pub sells a lot of the cold, gassy ciders like in the majority of pubs then why not see if your consumers would like to enjoy a pint of Real Cider instead. I think they will be pleasantly surprised!”

As National Cider Pub of the Year 2009, the Orchard Inn will be the first pub to be accredited as part of a new initiative from CAMRA.


As the number of UK pubs selling real cider and perry continues to increase, CAMRA is introducing a real cider sticker initiative to inform consumers where real cider is being sold. CAMRA hopes the scheme will make it easier for drinkers to recognise a cider pub, and give support for such pubs at a time when many are looking to diversify in order to offer something new to their customers.

Andrea Briers, Chair of CAMRA’s Cider and Perry Committee, will be placing the first-ever ‘Real Cider Sold Here’ sticker in the window of the Orchard Inn on October 1st, but is keen to stress that any pub serving real draught cider or perry all year round is eligible for this accreditation from CAMRA.


If a pub is serving real cider all year round, and it is of a good and consistent quality, we encourage them to contact us, as we’d like to do everything we can to drive custom towards their pub. This accreditation scheme is all about showcasing the availability of real cider, increasing sales of real cider and supporting pubs at a time when 52 are closing nationally per week.

For more information on the scheme, please visit the CAMRA website.