Great news for spring time when we can all get outdoors and enjoy springtime in the orchards. Where better than Somerset, the birthplace of real cider.

We can share with you the latest cider map for this area. Updated for 2013:

Burrow Hill Cider and the Somerset Cider Brandy company have won a Protected Geographical Indication – making them the only legal distillers of Cider Brandy in Europe. They also won bronze for their medium cider at the 2012 CAMRA Champion Cider awards.

On 23 February the Daily Mail reported that “According to latest research from Mintel three in five adults now drink cider, up from the previous year’s total of 47%” … “over the last five years sales of cider have increased by 32% to reach £2.7 billion in 2012.”

Download the map here – Link to Google docs. Or pickup from the tourist office in Somerset. 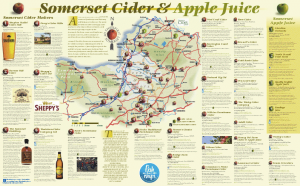