Since the 1976 Budget which brought cider into the alcohol duty schedule. The exemption, has served the cider resurgence well and has helped create a wonderful collection of regional ciders.

The European Commission recently notified the UK Govt that the 7000L Duty Exemption currently utilised by small-scale real craft cider and perry producers contravenes EU legislation. They are threatening legal action unless the UK Government comes up with a satisfactory response.

The EU are threatening something that doesn’t affect big producers, notably a £2,500-a-year tax bill which looks to shrink the ever growing popularity of craft cider.

As a small cider producer starting out, it would be almost impossible for me to move from a hobby into a small commercial business if the exemption didn’t exist. Sam S

The Small Brewery Duty Relief Scheme has helped many small breweries, but Cider makers are not eligible for this, and as such it’s already hard to even break even – we can’t mass produce real cider it takes 8 months to make.

What damage the clampdown will cause to livelihoods as well as ancient orchards is hard to estimate. Cider makers will not want to pay this so they will either end what must be England’s oldest drink, make cider discreetly, or wait to be shut down by EU. None of these are suitable options.

In January 2015, George Osborne and David Cameron visited a cider maker, Hecks – where Osborne reiterated that the South West could be the equivalent of the thriving west coast of the US as he launched the “long-term” economic plan. Not if the EU have their way. We have to make a noise to local MP’s to stop this action. We are talking about a rich heritage and history of cider in the West Country being shut down by EU.

Small craft cider makers are the upholding a tradition. This small tax break is the only way many can survive. Craig S

This will change the way farms have switched over in recent years from intensive farming to craft cider making as a sustainable business. As well as changing the local landscape and biodiversity into forgotten orchards, or worse still – destroyed to make way for other ways of making ends meet financially.

Who is going to go round collecting this tax from small scale cider makers in their garden sheds and outbuildings?

If you want your voice to be heard and help real cider, contacting you local MPs would be a good starting point.

Keep up to date with all the latest information at the SAVE OUR REAL CIDER Facebook group.

I was asked to provide information for an article the Sun newspaper ran today. Click on image for large version. 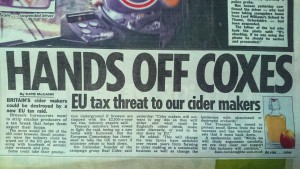