All posts in: Tours

The Cold Hollow Cider Mill is one of the top producers of fresh apple cider in New England, USA.

In the States, what we refer to as ‘Cider’ is known as ‘Hard cider’ over there. The mill and Cold Hollow produces apple juice ‘cider’ – immensely refreshing, and a great experience to see apples pressed in a big way!

The mill still uses a traditional cider press built in the 1920’s which you’ll see in the slideshow photos.

Last week I fulfilled a life time ambition to canoe across Scotland, from West to East coast along the Great Glen Way.

As you can imagine, I was intrigued to see if I could find real cider in Scotland along the way! 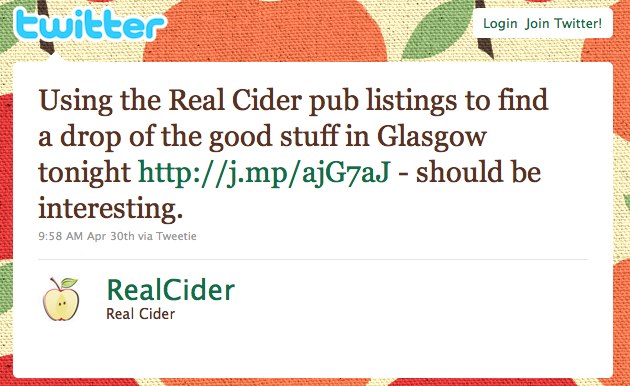 First stop was Glasgow, and the Bon Accord bar – no real cider here, but what a treat for ale fans – 10 real ales from around the UK, and a very limited edition batch of 120 bottles of Speyside whisky made by the pub, minus one now.

Then after 60 miles of paddling, we arrived on shore at Urquart Castle and walked to the nearest village of Drumadrochit. Where we discovered the delightful Benleva Hotel where we enjoyed Weston’s 1st Quality cider. This far north and it didn’t taste bad at all!

Then it was a short hop back to civilisation to Inverness, where we were in for another treat. The Blackfriar’s pub has been nominated as cider pub of the year for 2009 in the Highlands and Western Isles. We enjoyed two Weston’s cider’s on draft – old rosie and 1st quality.

If you are visiting Scotland soon, or if you are lucky enough to live there and are unsure where to find a real pint in a decent pub, then it’s worth checking out this years pubs of the year in Scotland, you may be able to find some real treats and experience the Scottish hospitality like we did!

The Highland and Western Isles Pubs of the Year 2010 – selected by local members, are:

View our listing for real cider pubs in Scotland on the real cider web site.

Do you know of any real cider pubs in Scotland that we should mention? Any special places that you have found the special stuff. Let us know in by commenting below.

During our Thanksgiving trip to East Coast USA last year, where we went on an Ice cider tour, we had a tip off from our Real Cider friends that there are some special cider varieties from an exciting emerging breed of artisanal ‘hard’ cider producers.

So, with a rental car, a map of North American cider producers and some empty cider containers we continued our road trip deep into Vermont and New Hampshire.

Cider in New England goes back to the 18th century, Americans realized that the prolific, hardy apple tree – which arrived from England in 1623 – offered a solution to their drinking dilemma. In 1767, the average Massachusetts resident drank 35 gallons of cider!

Today, we found that the most popular apples grown in the New England region are Macintosh, Geneva, Lobo, Empire, Russet, and Cortland varieties. Where the more patient and innovative producers are grafting English cider varieties onto native stock meaning that American producers can match our British know-how in traditional blending and cider making practices.

The Americans are finding that cider pairs beautifully with food. However, because cider is an agricultural product, it can lay claim to the currently fashionable quality of “somewhereness.”

Meaning it’s a slow process to convert public to ‘still’ cider, and also difficult to place on a supermarket shelf as a seller.

For example, where does it sit on a supermarket shelf – With the wines, or the the beers? As the ciders are being sold as a traditional, crafted product both consumers and sellers are becoming more comfortable with cider in the 21st century.

Down at Farnum Hill

Farnum Hill are a passionate team who are evangelising artisan cider from their orchards in Lebanon, New Hampshire.

They are working hard, attending wine expos and food markets across their region.

Owner Stephen Wood began converting his orchards to cider apples 20 years ago. Stephen has selected his own apples for the orchards and all are little-known varieties selected specifically for cider making.

Stephen has a tasting collective of 4/5 friends who carefully agree on the correct blends of cider apples each season after the ciders are fermented individually. It seemed to be much more experimental, yet a visionary way to achieve the best taste and ‘experience’ of the seasons apples.

Farnum Hill Extra Dry is widely becoming available on the East coast. Meaning you will see Farnum Hill being sold in 5 star restaurants in New York city for example, where the product has been adopted by innovative stockists and chefs.

The Semi-dry cider at 7.4% is a complex, fruity, nearly sweet experience. Championed as being fresh and elegant with foods from home cooking to cusine – making flavours more vivid. My favourite was the Kingston Black a clean, medium dry and very drinkable single varietal.

The ciders exhibited smoky, rich flavours, to bright citrusy notes, subtle grassiness, and the barnyard aroma that reminds you of drinking back at Roger Wilkins‘ in Somerset.


A fantastic trip to meet and taste the delights of the East coast apples. Definitely recommended, if you plan a trip to New England please pass by to sample some of the good stuff and send our greetings too!

Other cider producers in New England

Other producers in the States that have got people taking again about cider are Wandering Angus Dry and Westcott Bay which can be had on the West Coast.

Look out for our news report of a visit to a cider farm in Vermont which will be out soon.

CNN interviews Mike Johnson of Ross Cider and finds out what makes their collection of perry pears so special. The video also includes a brief tour around the orchards, and of course a tasting. Ross cider farm is located between the Herefordshire and Welsh borders.

In December we visited with Quebec in Canada, along with a passionate group Fruit Farmers and Cider producers from New England to learn about Ice cider production.

Organised by the Vermont department of Agriculture we visited two cider producers in the Rougemont area of Quebec. These producers are particularly well known for their traditional production of Ice Cider, known locally as ‘cidre de glace’. And Quebec being the birthplace of Ice cider in 1990 (1).

There are about fifty producers in the area. Most are of very small size, attracted in part by the very low capital costs required to enter the business.

Ice cider is a fermented beverage made from the frozen juice of apples. Which is then fermented

There are two processes:

Both the cidreries were built in 2005, and have already both won awards and accreditation.

The first producer was Michel Jodoin

This is truly a commercial operation, very strict production methods, which has recently become automated. They have a couple of scientists that ensure the Ice cider is correctly stored, fermented and bottled.

We tasted their ice cider and it was a quite caramelly, toffee flavour from the intense combination of tannis, and acids of the apples. At 9% giving a tendency towards a liquer drink enjoyed in a brandy glass or similar.

The second producer was De Lavoie.

A producer that had a collection of 17,000 apple trees as well as vineyards on their estate.

We tasted Ice cider ‘Ace’ – the smell – was full of aromas of apples, with the scent of flowers, at around 10% alcohol. In the mouth, such a concentration of apple flavour hits you and gives a complex taste of a collection of different apple .

The process for Ice Cider at De Lavoie is simple, but on a large scale:

900 litres of cider kept outside in sub-zero temperatures for 1 week, melted, then 150 litres of juice taken from the top of the barrel and fermented for 1 month in 12’c temperature controlled room. They stop the fermentation at 14% residual sugar.

I think you will see the two producers treat cider more like a wine product in their industrial units – compared to the large plastic barrels that you may see at a West country cider producer’s farm.

If you ever visit this area you are in for a treat. Also great news for people in New England, USA. There are also Ice Cider producers here now! We were also fortunate to have the visit organised by Eleanor Leger, the first Ice cider maker in USA. They make Eden Ice Cider and is just starting to be distributed on the East Coast.

Also thanks to Slow Food International and Stephen at Farnum Hill for introducing me to the Ice Cider fans!

We visited Northern France in the summer, and toured the Route de Cidre – which is a tourist trail where you can visit a fine selection of traditional cider makers in the North of the country.

France is the second largest consumer of cider

The main regions for cider makers are..

Pay D’Auge, and Domfront – both in Normandy, and Cornouaille in Brittany.

It varies in strength from below 4% alcohol to considerably more.Cidre Doux is a sweet cider, usually up to 3% in strength. ‘Demi-Sec’ is 3–5% and Cidre Brut is a strong dry cider of 5% alcohol and above. Most French ciders are sparkling. Higher quality cider is sold in champagne-style bottles (cidre bouché).

.. by looking for the AOC (Appellation d’origne controllee) mark on the label. These are legal guarantees of geographical origin, traditional methods of production and quality.

We hope you enjoy the photos, and encourage you to visit this special area of France!