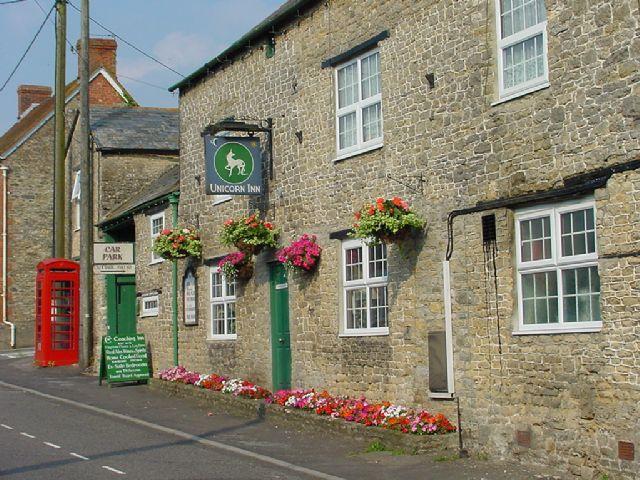 A Wincanton pub crowned best in UK for cider by CAMRA.

Somerset has long been regarded as the home of proper, high-quality cider.

And now this accolade has been cemented, after a pub near Wincanton was crowed the best place to drink cider in the whole country.

The Unicorn Inn in Bayford has been singled out by the Campaign for Real Ale (CAMRA) for its commitment to genuine cider from small, local producers.

Richard Cummins took over the pub with his wife Jayne on October 23, 2007, and said that he was absolutely thrilled to receive the award.

The Unicorn Inn is located in Bayford, just to the east of Wincanton
He said: “We got through the final four of cider pubs throughout the UK, then the judges had to choose between us and the King’s Ditch in Staffordshire. 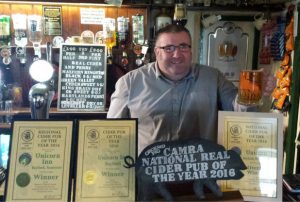 Richard Cummins, landlord at The Unicorn Inn in Bayford near Wincanton, surrounded by his awards presented by the Campaign for Real Ale (CAMRA)

“When we got the call around the middle of September, they told us we had won. They praised our knowledge of real cider, our relations with the local producers and our enthusiasm for real cider and perry. We are overwhelmed to have won this prestigious award.”

As well as being crowned the best cider pub in the UK, The Unicorn Inn has been crowned the best for cider in the whole of the Somerset, and the best the Heart of Wessex region, which stretches from south Somerset to the Isle of Wight.

In the latter case, it’s the first time that a Somerset pub has achieved the accolade in 45 years.

Mr Cummins has grown up with a passion for cider, developing a taste for the tipple as a young man from Plymouth.

He said: “Everything we have here is the real McCoy – proper cider, which is pressed on a farm, not made from concentrate like the bigger brewers.”

Watch Richard Cummins pour the perfect half pint of perry:

Mr Cummins buys in cider by the box from a wide range of local producers, including:

He said: “We like to give the customer an element of surprise. The cider ranges from 5.5 per cent to 8.6 per cent, and we don’t have everything in box at once, so you’ll always be able to try something new.

“When we have our next cider festival, on October 21 to 23, we’ll have 15 new varieties out for people to try.”

“Back in the 1960s and 1970s, cider pubs had a reputation for being rough and ready places, but we’re not like that at all. Everyone is welcome at our door.”

Going forward, Richard hopes that his business will help to keep proper cider at the heart of his community.

He said: “This public house-cum-cider house is a way of life. We will continue to work hard to keep it a place of social enjoyment for the pub enthusiast or real cider enthusiast to enjoy a quality, excellent pint of real cider or perry.

“We want to say a special thanks to CAMRA for all their research into places like this, and to all our customers who support this establishment.”